Workhouses, or sometimes referred to as the Poorhouse, were instituted setup in Britain to provide work and accommodation for the poor. Although these types of places have been around since the 14th century, it was in 1832 that the government introduced The Poor Law – to give the poor a place to live in exchange for doing work. Over 500 of these places were built in just one decade. The idea – to get the poor off the streets. The present workhouse in Ripon opened in January 1855, although another has workhouse existed on the site since 1776.

In Ripon, many people who could not afford to live, would apply to be admitted in the entrance block (now used as the Ripon Workhouse Museum). Paupers would appear before the guardians who would decide the fate. They’d be made to strip and take a bath – with the water being changed once a day. Clothes would be cleaned before entering. Nobody wanted to be one of the last people in that day as the water would be cold and dirty.

Many homeless people would be given short term access to the workhouse too. Known as the ‘Tramp’s cells’, someone could spend up to 2 nights in here in exchange for 2 days worth work.

Those who would stay permanently  were kept in the main block, with the men and women separated into wings on either side, meaning families and couples would be split up. They would be able to see each other usually on Sundays.

Daily work would include crushing stones, chopping wood, while women would work in the kitchen and children educated in classrooms.

Many families would be forced into the workhouse if the household father committed a crime and was sent to prison meaning the wife and children would be evicted from their homes.

It is often said that the only way out of a workhouse was to die, as you wouldn’t want to leave without any form of work and accomodation on the outside. This meant most people would just spend the rest of their days stuck in this system. The youngest person to enter Ripon Workhouse was just 2 weeks old, with the oldest recorded death being over 80 years old.

A cart outside would transport dead bodies from the morgue in the workhouse to their place of burial.

One story tells of a woman and child who tried to enter Ripon Workhouse. She was poor and had nowhere to stay with her baby. She’d drank alcohol earlier that evening and was deemed to drunk by the guardians to stay, so she slept outside in the cold. The next morning she was sober enough to go inside, but her baby had died.

Staff who work at the museum claim that the doorbell at the front of the building will ring, despite CCTV showing that nobody is there. Could this be the spirit of someone trying to get to their last resort?

On the 28th November 1855, a 61 year old lady called Harriet Rodwell realised she would never escape the workhouse and decided death was the only way for her to get out. She fastened a  shawl around her neck, and attached it to a door handle whilst in a sitting position, and then slid down the stairs, killing herself. The stairs whre she took her own life were recently rediscovered behind a wall after renovation work, and her spirit has been seen in this area in the daytime by terrified office workers who now work in this converted part of the workhouse.

Another story claims a drunk lady called Margaret Clark was dragged to these stairs and had cold water thrown on her in an attempt to subdue and rape her by a sinister Master.

George Greenwood was one of the masters here, and his wife was put in charge of infants and children. She was said to be very strict with children,and as punishment, would lock them in a small room behind a classroom for several hours until they had calmed down. One day, she had locked a five year old boy in this room, but received news of her sister being gravely ill in Leeds, so left to go and visit her…forgetting that the young boy was still locked in the cupboard. Upon returning three days later, she saw people were looking for the unnaccounted boy, believing him to have escaped. When she showed them where he was, he was barely alive and died a couple of days later. She would also die within five months during childbirth. Her ghost is said to still be seen around the classroom area.

In total, 72 deaths were registered between these walls in just 62 years. That is not including a workhouse that was on this exact site before this one was built.

The doors in the tramp’s cells have been known to slam shut on their own, and banging has been heard in this area. People have also experienced disembodied voices in this area.

One couple visiting the museum claimed to see a man pushing a penny farthing through from the master’s house despite being the only people in the museum at the time.

Many children were inmates here and the sounds of children playing and laughing has been heard. One child in particular has made his presence known to multiple mediums – 5 year old Henry, who records show was in here with his mother.

A figure has been captured on camera in the clothing store, which is currently in the archives of the museum.

Ripon is a cathedral city located in North Yorkshire, but it feels more like a town. It is located just a few minutes from the A1 motorway, which is the best way to travel here. Parking can be tricky – there is a short term carpark in the centre, but you only get 1 hour to stay here, so its quite pointless for tourists visiting. This carpark is also closed on Thursdays, and is used for a market place. A longstay carpark is located about a minutes walk from the workhouse.

If driving is not an option, the number 36 bus from Leeds city centre via Harrogate passes every 20 minutes.

Ripon Museums cover 3 different museums – The Workhouse Museum, The Prison and Police museum and Ripon Courthouse museum. I would advise visiting all of these places, but if time is of the essence, prioritise the workhouse. Entry to the workhouse is £9 for adults, although for £16.50 you can buy a pass to have access to all 3 museums, valid for a year. Under 15s pay £6.50 for the workhouse, or £9.50 for a year long pass for all 3. The museums are ran by volunteers, and the money raised goes towards maintaining the buildings.

Ripon Workhouse currently has 2 buildings that you can enter. The Museum Block is full of props and rooms decorated to look original. The Main Block sadly has been converted into offices and learning space. There are a few areas that have been kept how they were.

UK TV show Most Haunted were given access to film in the museum block, as the main block was not open for ghost hunting at the time. We have an exclusive! The Museum block is highlighted in red, and the old Main Block is highlighted in yellow. When paranormal groups run nights here, it is usually one or the other due to the two buildings having seperate owners. 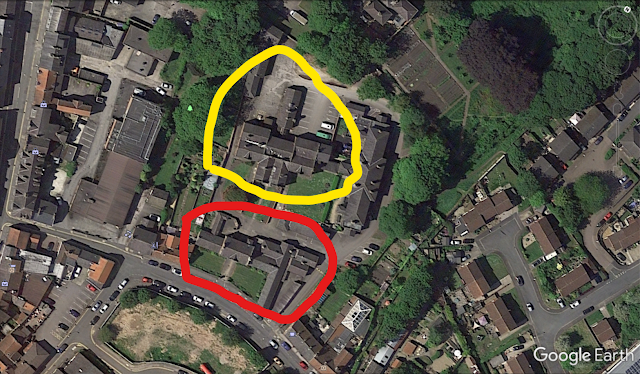